This morning the people of Kabumbwe Cell, Mamba Sector, Gisagara District were joined by the team of HQ Power as well as SP-EPC Staff for the monthly community work known as “Umuganda” in Kinyarwanda. – which means ‘coming together in common purpose’ – is to promote unity and reconciliation in a society. Digging ditches, sweeping the grounds, making composts, building houses, clearing land, or any other activity that is helping the country becoming better.

The turn up for this exercise was massive whereby about 1,500 people were in attendance. This exercise mainly concentrated on cleaning the Kabumbwe football pitch where the upcoming groundbreaking ceremony of the HQ Peat to Power Project will take place on May 9th 2017. 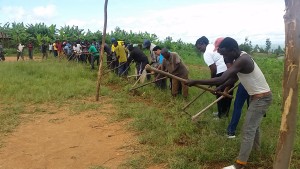 Also present were the Executive Secretary of the Mamba Sector, Mr. Jean Bosco UWIMANA, his team and the security bodies (Army and Police). As it is often done after a community work, a meeting was convened. The Executive Secretary of Mamba Sector, who spoke on behalf of local government, reminded the people of Mamba to take the economic development that the project is bringing to their doorsteps very seriously.

Mr. Gaspard NKURIKIYIMUKIZA, the Deputy Project Manager of HQ Power, called upon the general population to cooperate with the project team and ensure total security for everyone in the Sector.

Mr. Chandra KANT, the Head of Administration at SP-EPC, thanked the local population for the sacrifice they are doing to support the project. He promised that the project will only make their lives more comfortable.

Finally, the HQ Power Environmental, Social and Governance Manager highlighted that the Project will support the social activities that the people of Kabumbwe will initiate. “We are here for you and we are expecting you to be here for us”, Ms. Christine ASHIMWE noted.